Be more consistent about writing in blog.

So, in an attempt to be disciplined about this, I'm going to promise to write something every Sunday. Tomorrow: the promised review of Fairies of Dreamdark: Silksinger

In the meantime I can tell you that I greatly enjoyed Scott Westerfield's Leviathan and Behemoth, (they're too popular for me to do a full review, since I'm supposed to be recommending lesser-known books). What's not to like in a story with a prince on the run, a girl disguised as a boy, and an airship that's actually a giant floating whale. I love the way Westerfield re-imagines the Allied and Axis powers of WWI as the Darwinists and the Clankers.  Tesla cannons, Perspicacious Loraxes, mechanical elephants: it's clever, imaginative, and a whole lot of fun. There were a couple of places in Behemoth where my suspension of disbelief was stretched beyond the breaking point, but once you've swallowed the floating whale, you're pretty much in for the duration!

I'll leave you with some pictures of awesome chairs--who knew there was such cool furniture out there! (And how does one choose which iconic chair to put in the living room?)

The Bouloum Lounge, designed by Olivier Mourgue, made by Arconas (in Canada!):

The Tongue chair, designed by Pierre Paulin, made by Artifort: 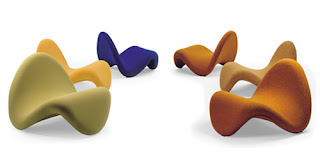 The Voido rocking chair, designed by Ron Arad, made by Magis: 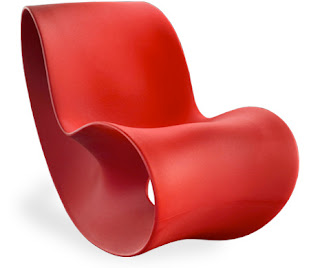 Little Globe, designed by Pierre Paulin, made by Artifort: 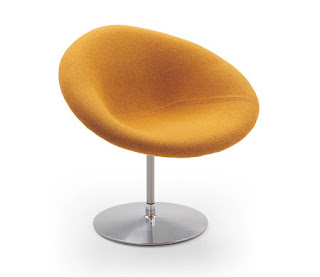 I got all these images from Hive Modern, a store that makes me wish I lived in Portland.
Posted by Kim Aippersbach at 6:48 PM