The Lost Code, by Kevin Emerson

A quickie review I did for Goodreads, of a book I read on vacation: 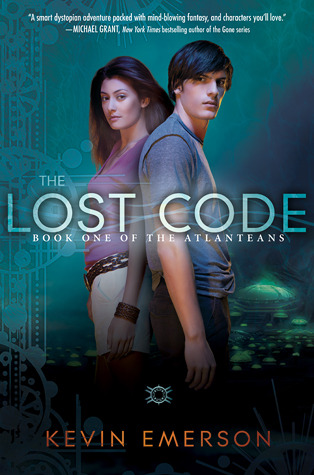 I picked up The Lost Code on a random library browse, because I was intrigued by "Atlanteans." I was immediately drawn in by the narrator, Owen, who is drowning when we first meet him. He's not snarky and self-confident, like so many of the heroes we love, but he's self-aware, and his awkwardness is so familiar to those of us who weren't snarky and self-confident when we were teenagers. He's not particularly heroic at the beginning, which makes his journey to heroism more believable, in my opinion.

This is a fun read in the Percy Jackson vein, a summer-camp-turns-sci-fi/magical adventure. I liked the slow build-up of things-are-not-what-they-seem, what's-really-going-on-here, isn't-that-super-nice-camp-director-kindof-creepy. I liked the swimming scenes. I liked the Atlantean technology and the futuristic dome technology. There were a few things I would like to have been more developed, and this isn't one of those jump-up-and-down amazing books I'll reread a dozen times, but it was page-turning and engaging and I'll look for the next one.
Posted by Kim Aippersbach at 3:20 PM