Northward to the Moon, by Polly Horvath 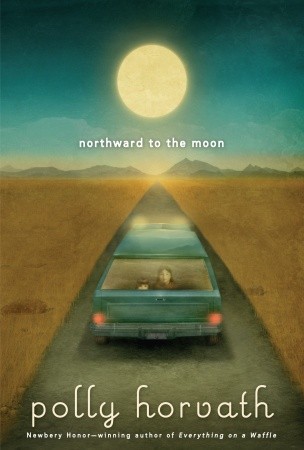 I've been a Polly Horvath fan since I picked up Everything on a Waffle purely for its title and fell in love with her quirky characters, deadpan humour and off-the-wall philosophy. Northward to the Moon is a sequel to My One Hundred Adventures (my review here).  Adventures is a complete story unto itself, but now we get to find out what happened next to Jane and her unusual family.

Jane's dreamy poet of a mother has never identified the fathers of her four children; she may not even know who they are; but Ned is a definite possibility for at least one of them, and at the end of My One Hundred Adventures he has decided to take responsibility for the family. They move to Saskatchewan where Ned takes up a position teaching French. At the beginning of Northward to the Moon we learn:


Our family lasted almost one year in Saskatchewan. It took the town that long to figure out that Ned didn't speak any French.

Jane is thrilled to be on the road again seeking adventures. Ned takes her and her mother and siblings along a trail of clues from Ned's past to northern BC, Las Vegas and a horse ranch in Nevada.


It occurs to me how Ned and I wanted to be outlaws and here we are, in the American West, in the high desert. We are escaping who knows what with a bunch of money from who knows where. Do things happen because you want them to? Can you create your life and adventures by imagining them?

Ned ends up with a bag of possibly ill-gotten cash from his brother that he doesn't know what to do with. He is reunited with his mother and sisters and gets stuck caring for his mother when she gets injured. Jane is tangled up in these adult affairs and yet powerless to affect them. She gets a crush on a ranch hand and tries to figure out why her sister is so depressed. She thinks adventure and excitement are everything she wants from life, but maybe it would be nice just to go home.

Jane as the innocent narrator has a hilariously accurate perception of the adults around her. I found myself laughing with Jane at the same time as I felt horrified by how irresponsible everyone was. Northward to the Moon is more bittersweet than One Hundred Adventures: it's an elegy about families and how they fail. It's also about how they succeed despite all the ways they fail. Jane has a resilient spirit, and people do come through for each other. I found this book less funny and more troubling than the first one, but I never wanted to put it down. And I really, really hope there is a sequel.

For fans of Sharon Creech, Katherine Paterson and Kit Pearson. Cornbread with maple syrup. Or with baked beans. Or both.