I haven't been inspired to blog much lately: a lot of books I've started but not finished, or finished but not been very excited about, and when the weather is lovely and the garden needs constant attention, a book has to be pretty exciting to drag me into the basement to write about it.

But I forgot I hadn't written about this series, which I finished last month. (And it's so hot outside that the basement is a cool, pleasant place to be right now!)

I tend to avoid adult fantasy because it's all the same—please, no, not another inn! YA has been a refuge and a nurse log for original thinkers because it's creating itself as a genre and doesn't have all the weight of Tolkien (May He Live Forever) resting on it. When I discover a truly original adult fantasy I have to jump up and down and shout about it. 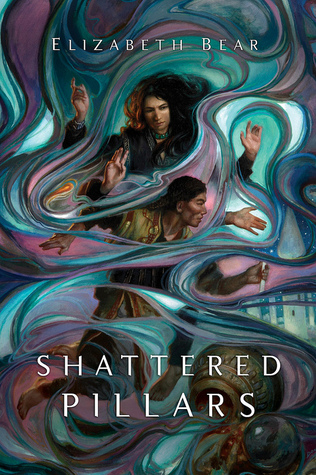 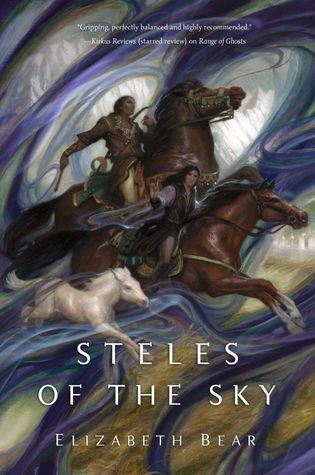 Range of Ghosts, Shattered Pillars, and Steles of the Sky  are truly original, epic, adult fantasy. (And this trilogy would be fine for YA audiences, as well*.)

The setting is fantastic, in all the meanings of that word. It's based on Asia: not just part of Asia, but the whole thing: deserts, steppes, mountains, jungles and fabulous, colorful empires that sound a little like Mongol, Persian, Chinese, Russian and lots of other cultures I don't even know about, but with new and fascinating magic and gods. So intriguing and interesting and well-developed! Here's Elizabeth Bear talking about how she deliberately set out to write something not Euro-centric:

I wanted these books to focus on the cognates of cultures that epic fantasy so often marginalizes–those mysterious Easterners, usually portrayed as a swarthy, untrustworthy threat on the borders of our heroes’ empire.


As a Euro-descended Westerner raised on Celtic and German fairy tales, I found it delightfully refreshing to read a novel that is completely different. And so imaginative! Not just one original magic system, but a different one for every country, with rituals and language and trappings that might be inspired by Buddhist or Hindu or Islamic imagery but are entirely new. World-building rests in the details, and the world of Eternal Sky is full of evocative objects with symbolic potential. Here is Bear talking about all the different kinds of books in her world, including books that blind those who read them. (No spoilers, but oh, that concept creates a plot thread that will wring your emotions and hang them out to dry!)

Rich and varied characters inhabit this wondrous world, and we get to meet them and learn each of their histories and secrets.  Temur, heir to the Padaparashna Seat, who stumbles off a battlefield with a remarkable horse, and then has to figure out what he's going to do about having survived.  Once-princess Samarkar, the wizard who gave up her fertility to find her magic, and then finds love. Edene, the steppe warrior-girl who starts off needing rescuing and ends up . . . well, I don't want to spoil it, so I won't say, but it's not where you expect her to end up! By the end, I think Smarkar and Edene have taken over as main characters from Temur, and I love their character arcs.

I love all the strong women: Hrahima the warrior tiger-woman who refuses to believe in her god; Yangchen, ambitious second wife of an emperor. Tsering-la, wizard without magic. Bear is obviously trying to upend gender stereotypes, and she does it gloriously. Take note, authors: we want more characters like these ones! (Kudos to Bear for showing nursing mothers going about their business as if having a baby was no hindrance—but I had to laugh at the idea of strapping a baby on your back and riding into battle. Babies would somewhat hinder that business.)

The love stories are brilliant: flawed, confused people cleaving together with the best of intentions and behaving maturely about it even when it gets complicated. Love that focuses more on tenderness than passion--oh, how refreshing!

There are all kinds of subplots that could have been novels in their own right—I did sometimes forget who people were, and I thought some of the subplots were tied up a bit too quickly or not really tied up at all, but it all added to the richness of the world.

Bear's writing is gorgeous, every sentence a pleasure to read, every description vivid and sensual.


This—this was how empires ended. With the flitting of wild dogs in the dark and a caravan of moons going dark one by one.

I can't forget to mention the animals, both real and fantastic: wonderfully depicted. Great dragons.

I will be searching out Bear's other writing (I have read the first book of her Jacob's Ladder trilogy, which was brilliant and fascinating and original and I didn't understand it at all. Maybe I should try again . . .) There are two novellas set in The Eternal Sky's world, so going to look for those now. (And apparently there will be more novels—not sequels, but same world.)

The Eternal Sky trilogy is a really good Thai curry: maybe a yellow curry with chicken and potatoes. Sweet with coconut milk, spicy, satisfying, and redolent with cilantro and lemon grass.

*The characters are adults and deal with issues such as childbirth and politics, which YA tends to leave alone, but the sex is off-stage, and the violence is realistic (there's a war going on) but not gory or gratuitous.
Posted by Kim Aippersbach at 9:31 PM