A bunch of stuff I've been reading/watching

A lot's been going on in the past month, and I just haven't had the energy to do any blogging. Yes, there was that interesting political event south of the border, that we're all still trying to wrap our brains around. In my personal life I had my parents' surprise 50th Anniversary party to plan and pull off (with tons of help from my siblings)(it went so well!). I've been doing a major editing pass on my novel for NaNoEditMo (did I make that up or have other people already made it a thing?). And I got a nasty virus that laid me low for more than a week. 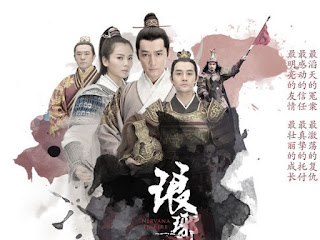 But being sick allowed me to binge-watch all 54 episodes of Nirvana in Fire, the most wonderful Chinese historical drama you've never heard of that everyone has to watch, it's that good. Gorgeous production values (the costumes. oh, the costumes!), fantastic acting, wonderful characters and a brilliant plot. Think Game of Thrones without the sex and gratituous violence; House of Cards but with characters you care about and can actually root for; Lord of the Rings without the orcs and elves. I suggest reading Sherwood Smith's excellent introduction to it before diving into the first episode, and keeping the Wikipedia character page open (though careful of spoilers) until you figure out who everyone is. Trust me, it just gets better and better; the final episodes are intense.

Since we all need to be making a lot more noise about diverse writers, characters, stories, I should mention a couple of books I picked off my library's Teen DiverseBooks shelf:

Akata Witch, by Nnedi Okorafor. I could simplify this by saying it's Harry Potter set in Nigeria starring a girl, but that wouldn't adequately convey the vividly imagined, complex, scary and fun world Okorafor creates. Sunny is trying to fit in after having moved to Nigeria from America; it doesn't help that she's albino. But she discovers that her differences are much deeper than that: she is one of the Leopard people, with magical abilities she must learn to master while keeping them a secret from the non-magical Lamb people. She has friends and mentors to help her through some dangerous trials, and the sometimes useful, sometimes patronizing commentary in Fast Facts for Free Agents, a guidebook that we get amusing snippets from throughout. I loved the magic, so different from the Eurocentric magic I grew up with. Leopard people get paid (in chittim that fall from the sky) every time they learn something new—there's a cool concept! Magical power manifests itself in a sort of mask which is your inner identity coming out—and your magical ability is connected to whatever makes you unique, even if others see it as a flaw or something to make fun of. Just so many interesting ideas to go along with all the colourful visuals. Lovely cover, too.

Prophecy, by Ellen Oh, is a light, easy read with a gorgeous ancient Korean setting. It's a fairly predictable quest fantasy with a warrior girl sworn to protect a young prince, and danger to the kingdom that can only be averted if certain magical objects are found. But it's lifted from run-of-the-mill by the vivid mythology and lovely period details. It's a world I really enjoyed exploring. I also liked Kira, liked her relationship with the (rather bratty) prince, liked the potential romance that is just hinted at (this is the first book of a trilogy). Not earth-shattering, but it's a worthy debut novel and I'm interested enough to read the rest of the trilogy and see where she takes the story.

Black Dog Short Stories II, by Rachel Neumeier. I love her writing and I love this series. These are more vignettes about the characters (such good characters! they all keep developing in such awesome ways!) with some tantalizing hints about the big bad for the next novel.

Queen of Blood, by Sarah Beth Durst. This is an author who is starting to get the notice she deserves for her widely varied body of work. I was really impressed by her creepy, paranormal thriller Conjured, and by her epic desert/gods fantasy Vessel. I'll be reviewing her fun, colourful middle-grade book The Girl Who Could Not Dream on Monday. Queen of Blood is another entirely new type of fantasy in a fantastically original new world. (It's marketed as adult, I guess because the characters are young adults and there's some (not at all explicit) sex, but it works well as YA.) Aratay is a forest kingdom populated by nature spirits who are only prevented from killing all humans by the power of the Queen, who channels their instincts into serving humans instead. Any girl with the ability to control spirits is trained to become a potential heir. It's a coming-of-age and developing-powers story in a fascinating, beautiful and dangerous setting. Durst is a masterful writer and it was an entirely enjoyable novel with great relationships, lots of intrigue and suspense and a fair bit of humour.
Posted by Kim Aippersbach at 1:05 PM