The Lost Conspiracy, by Frances Hardinge 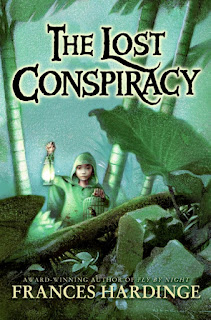 This is a really, really good book, and you must read it. Go see if your library has a copy. Even quicker, it's on Kindle and it's cheap (by its original title, Gullstruck Island). (No, I don't get a cut of every sale!)

I don't want to tell you anything about the plot, because I don't want to give anything away. This is a book about secrets and lies, conspiracies and betrayals, murder and revenge. It's also about family and loyalty and myth and redemption. It's dark but it has a light heart.

Here is our first glimpse of our heroine:


As it happened, the girl supporting Arilou had a name too. It was designed to sound like the settling of dust, a name that was meant to go unnoticed. She was as anonymous as dust, and Skein gave her not the slightest thought.

Neither would you. In fact, you have already met her, or somebody very like her, and you cannot remember her at all.

If that doesn't give you a frisson of anticipation about the coming story, then I give up on you entirely!

The Lost Conspiracy is set on a marvelous volcanic tropical island. On this island and nowhere else, some children are born with the ability to send their senses out of their body independently, so they can see, hear, taste, touch, and smell things at a far distance. Before they learn to control this ability, they are often absent from their bodies, so a child who has trouble walking or talking or who doesn't seem to connect with their surroundings might be disabled or they might be Lost. Arilou is one such child. She and her younger sister (oh, have I not mentioned her name yet? I must have forgotten. Hardinger doesn't even tell us until Chapter 2) get caught up in an island-wide plot masterminded by a man with no face, that threatens all of the Lost and all of Arilou's kin.

The richness of Hardinge's fantasy setting reminds me a lot of Laini Taylor. Flitterbirds peck at your shadow and when they fly away they unravel your soul with them. The volcanoes King Fan and Lord Spearhead are rivals for the affection of a third volcano, Lady Sorrow. Implacable bounty hunters, called Ashwalkers, gain strength and protection by dyeing their clothes in the cremation ashes of the criminals they catch. The original inhabitants of the island, the Lace, have become outcasts, because when settlers first built a town in the valley between two volcanoes, the Lace kidnapped townspeople and sacrificed them to turn away the volcanoes' wrath (and save the town). The Reckoning is a secret group of Lace who have sworn to take revenge for murderd kin: they get a half a butterfly tattoo on one arm when they take the oath, and the other half of the tattoo on the other arm when they complete their vengeance.

It's not always easy to tell the good guys from the bad guys; in fact, not a single character is what he or she first appears to be. But at the end, right and wrong are clear and everyone gets their true name. (Oh, right. The heroine's name. It's Hathin.)

Hardinge's prose is jungle-lush and full of imagery: "they swung into battle like leaves on a water eddy"; "the king of tricks hatched in Hathin's brain like a baby dragon"; "a young child's despairing cry drew its serrated edge across Hathin's soul." All the strands of myth and symbol come together in a very satisfying way when the nameless girl defeats the faceless man.

Have I convinced you yet? I've read one other book by Hardinge: Fly By Night. It was pretty good, too; also had an interesting fantasy world with conspiracies and secret organizations and a nobody heroine (named after a housefly). I'm going back to the library to pick up Verdigris Deep, also known as Well Witched. And I just checked out Hardinge's amusing webpage.

The Lost Conspiracy is like a dish I had in Hawaii: mahi-mahi crusted with macademia nuts in a lime/coconut-milk sauce served with mango-pineapple salsa. (Oh, I really want to go back to Hawaii!)
Posted by Kim Aippersbach at 1:38 PM