MMGM: This list should keep my 13-year-old nephew busy all summer!

This started in response to my sister-in-law's request for book recommendations for her 12-year-old son last year, and I've been very (very) slowly fulfilling it, one post at a time. Sorry, Stacey, it's taken me so long to compile this, and this is by no means a complete list, but I think it's long enough now! Be sure to visit my previous posts, here, here and here, and check the comments for more recommendations. 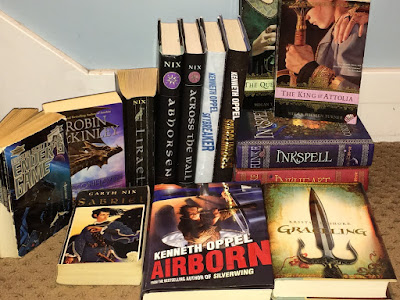 The Fog Diver, by Joel Ross. Earth is covered in a dangerous nanite fog, so people have to sail around in airships. There are pirates.
Mars Evacuees, by Sophia McDougall. Dangerous adventures on Mars with a hilariously useless robot companion.
Ender's Game, by Orson Scott Card. Classic military academy adventure.
Nomad and Ambassador, by William Alexander. Kid chosen to be ambassador to aliens (because adults just aren't open-minded enough.)

Airborn trilogy, by Kenneth Oppel. Straight up adventure with airships. Great series.
Leviathan trilogy, by Scott Westerfield. More adventure on airships, but these ones are whales. No, really, it's awesome.
Sabriel series, by Garth Nix. Really cool magic and necromancy. The Old Kingdom is one of the best created worlds out there.
Graceling trilogy, by Kristen Cashore. Kick-ass heroine who's even better at using her brain.
A Stranger to Command, by Sherwood Smith. Might be hard to find, but if you liked Ender's Game, this is similar (just not in space).
The Thief series, by Megan Whalen Turner. If you like tricky, unpredictable main characters, he's the best. (I don't know what happened to my copy of The Thief, but you can see sequels The Queen of Attolia and The King of Attolia in the photo.)
Jinx trilogy, by Sage Blackwood. Reluctant hero has to save enchanted forest; he's quite grumpy about it. Very fun.
The Floating Islands, by Rachel Neumeier. Flying people, what more do I need to say?

Wings of Fire series, by Tui T. Sutherland. Magic, friendship, adventure, finding out what you're good at: Harry Potter except everyone's a dragon.
Dragonhaven, by Robin McKinley. Boy grows up in a natural reserve for dragons, rescues a baby dragon. Turns out dragons are very hard to raise. 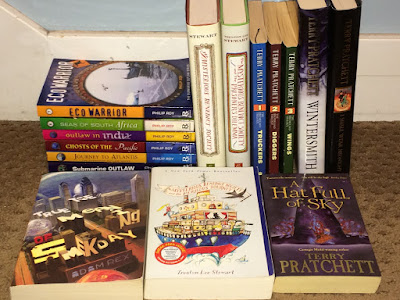 Submarine Outlaw series, by Phillip Roy. Canadian libraries might have this one. Kid builds his own submarine and sails around the world having adventures.
Heir series, by Cinda Williams Chima. For everyone who knows they're really a warrior/wizard/dragon/sorcerer at heart.
Inkheart trilogy, by Cornelia Funke. A classic for a reason: books come to life. Because they do.
100 Cupboards trilogy, by N. D Wilson.  Not just one door to another world, but 100.
The Grimm Legacy trilogy, by Polly Shulman. What if you could borrow fairy tale objects from a library?
The Chronus Chronicles, by Anne Ursu. Looking for more Greek mythology after Riordan? These are really well done, and funny, to boot.

The True Meaning of Smekday, by Adam Rex. Aliens invade and it's really, really funny.
Terry Pratchett. If you like witches, try the Wee Free Men series. If you loved The Borrowers, try the Bromeliad trilogy.
Skullduggery Pleasant, by Derek Landy. A wisecracking skeleton solves mysteries with a snarky 12-year old.

Intriguing mysteries (fantastical or not)

The Mysterious Benedict Society trilogy, by Trenton Lee Stewart. For geniuses only. (The Society, not the books.)
Any and all of Frances Hardinge's books. They're fantasy, but I'm putting them under mysteries because they all have a certain creepy mysteriousness about them.
Greenglass House, by Kate Milford. A bunch of strangers trapped by a blizzard in an old house with a history of smuggling.

Phew! Isn't it wonderful how many wonderful books there are? Please add more to my list in your comments!

For ongoing recommendations, every Monday you can go to Shannon Messenger's blog for Marvelous Middle-Grade Monday. Also Boys Rule Boys Read! is a great blog aimed at boys: always new books to find there.