The Enchantment Emporium, and The Silvered, by Tanya Huff

I missed the deadline for MMGM again this week; I'll have one next Monday for sure! Instead, I'm going to veer slightly away from YA in order to plug another Canadian author. Canada has some great names in sci fi/fantasy that you may or may not have heard of or known they were Canadian. Julie Czerneda I've reviewed here, and need to read more of. Tanya Huff I'm just beginning to discover.

Here's part of my Goodreads review of The Enchantment Emporium, a fun urban fantasy/paranormal romance (whatever you want to call it) about a girl who moves away from her very magical family to inherit her grandmother's junk shop, which is definitely more than it seems: 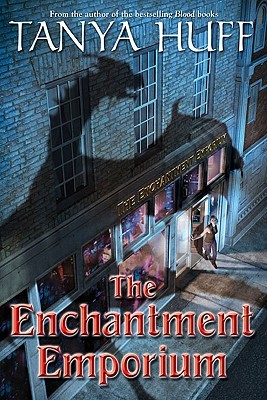 Funny, sexy, intriguing, fast-paced, and, oh yes, very, very funny. The aunties try to manipulate people by sending them pies. I mean, that's what aunties do, isn't it? The fact that they're scary magical aunties and magical pies is just icing on the cake, so to speak.

Loved the characters, loved the family dynamics, loved that everyone behaved within the parameters of the magical system--it was weird and it took a long time to understand, but it was consistent. Loved the magic mirror. Loved the dragons. Loved that it was set in Calgary! (Great line about the Calgary Tower (Allie arrives from Toronto): "As freestanding phallic symbols went, it was smaller then the one Allie was used to, but maybe Calgary felt it had less to prove.")(It's funnier if you're Canadian.)

And there's a pretty steamy romance. Did I mention the dragons? In Calgary. In a country-western bar. Love it. There's a sequel I haven't read yet, but the story is self-contained. (If you've read the book, then read the rest of my Goodreads review, which has spoilers. I'm curious to know what you think.)(If you haven't read the book, don't read the Goodreads blurb, which is both terrible and spoilery!)

The Silvered is a mix of traditional fantasy, paranormal and steampunk, with a bit of regency romance thrown in. It's set in a world where a science-based empire is trying to take over a country governed by shapeshifters and magic users. It's the coming-of-age story of Mirian, a young, not-very-skilled magic user who sets off with the equally young werewolf Thomas to rescue five Mage-pack women from the clutches of a very evil emperor. Points of view include the implacable Captain Reiter who is pursuing them, and the courageous mage Danika, doing her best to free herself and her fellow mages even though most of her magic has been disabled.

I loved the Aydori society, with werewolves at the top and upper-class mothers parading their daughters at fancy-dress events, hoping someone from the Hunt Pack will catch their scent. I loved the developing relationship between Mirian, just learning to use magic she didn't think she had, and Thomas, trying to be the protector and leader his Pack leader brother would want him to be. Captain Reiter really grew on me. And Danika was so strong and wise in a terrifying situation, I was rooting for her all the way through.

Both of these books could work for an older YA audience. Emporium has more sex (all of it PG (ie: not explicit), though the variety of it could be more eye-opening than younger teens might want), and Silvered has more violence (the emperor is evil like Hitler, so there are a few disturbing scenes of torture/experimentation). But their stories of strong young women finding their place in the world will resonate with older teens.

The Enchantment Emporium has to be a pie: a big, flaky, juicy bumbleberry pie, served warm with ice cream. The Silvered is a little more epic, with more depth, maybe a roasted pumpkin soup with creme fraiche and cilantro.

These are books 5 and 6 in my Canadian Book Challenge. Seven more to go before June 30! Be sure to visit John Mutford's blog for more great Canadian reads.

Posted by Kim Aippersbach at 4:17 PM