I've been out of internet range briefly (not for the whole blogless period, but I'm going to use it as my excuse anyway!). I hiked part of the Juan de Fuca Trail with my siblings, my son, and my father. It was quite the adventure. This is not a trail for the faint-of-heart, but it's gorgeous. My brother takes awesome photos, so I'm going to steal a few to show you what it was like: 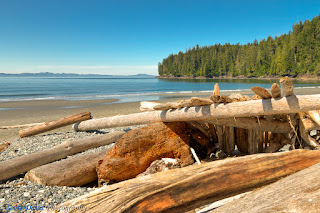 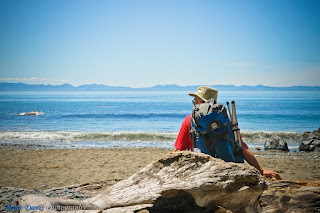 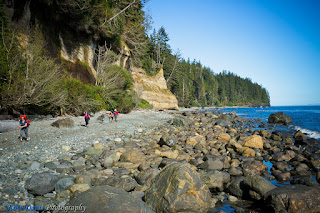 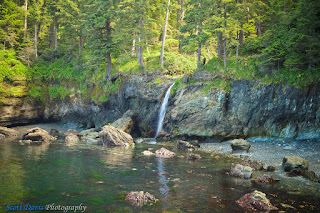 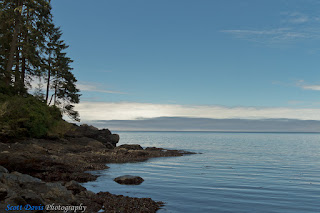 Serene vistas? Check.
But to access all this beauty, you have to follow a trail that follows every contour of the water-carved coast, and that means going up every ridge and down every gully. Straight up, and then straight down. Over and over again. Thirteen times in twelve km on one day (someone going the other way told us that, and so I counted. He was right.) No sissy switchbacks, either. These pictures give some idea of the steepness: 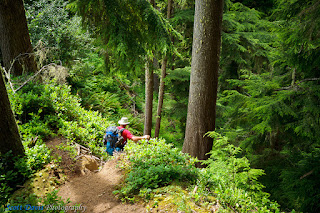 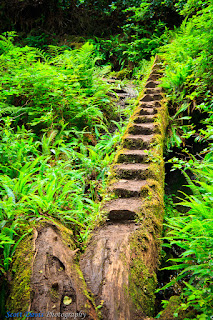 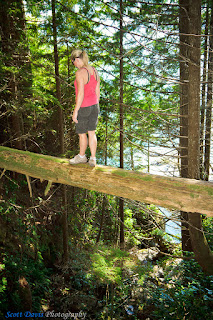 No, the trail doesn't go over that log my crazy sister is standing on, but there were some sections that were nearly as perilous. We were planning to hike the whole 47 km trail, but on Day 2 my dad took a head-over-heels tumble down about 8 feet of nearly vertical trail and injured his rib. We managed to get him to camp (my 11-year-old son carried his grandpa's backpack for 3 km while my brother carried his own plus my son's. Lots of heroism that day!) but we decided we'd better leave the trail the next day. In the end it was just as well, because the people coming the other direction warned us about knee-deep mud in the next section! (And we were already pretty tired of dodging mud while clambering down ridiculous slopes.) So another year we'll have to come back (later in the season, maybe) and finish the trail. In the meantime, my knees are still recovering!
What did I have on my iPod to read while I was hiking? Fly By Night and its just-released sequel, Twilight Robbery, by Frances Hardinge. (Okay, I'm on a bit of a Hardinge kick. But she's worth it!)
I've also just tried out Jim Butcher, and found Storm Front, the first Harry Dresden novel, to be quite entertaining (not particularly appropriate for younger audiences however: no graphic sex, but adult situations and a fair amount of scary (and gross) violence).
The Grimm Legacy  by Polly Shulman is worth a post of its own, so I'll just say I recommend it and add it to the list of posts-to-come. I should be able to start making a dent in that list, since I'm spending a couple of days at our new house on the Sunshine Coast, and there's not that much to do here. So stay tuned!
Posted by Kim Aippersbach at 4:15 PM No comments: