Genius is the new sexy: Lord Peter Wimsey, Doctor Who, and Benedict Cumberbatch

I haven't been blogging about YA or middle-grade books lately, because I've spent the past month working my way through Dorothy L. Sayers' Lord Peter Wimsey mysteries. I can't believe I hadn't encountered this character before. Lord Peter Wimsey is the Scarlet Pimpernel meets Sherlock Holmes, a foppish, fool-about-town who notices everything and sees the patterns everyone misses, and to whom everyone talks freely because he seems so harmless. And he has the brilliant Bunter as his manservent. Sayers writes long, complicated mystery plots--each of them very different--each plot uniquely suited to the specific setting, whether a Scottish fishing village or a London advertising agency or a woman's college at Oxford. She can be gently humorous or scathingly satirical about the society her mystery plot exposes; as with all good mysteries, her stories are really about the failings and foibles of humanity.

But Lord Peter, oh, Lord Peter! He drives too fast and talks too much and is scarred by his time in the War. With his compassion and arrogance, his precision and recklessness, his deep melancholy and his passion for life--I'm convinced that he is the inspiration for Doctor Who. Is there a Doctor Who fan out there who's read Sayers? What do you think?

What got me thinking in that direction is that the crush I have on Wimsey is the same kind of crush I have on Doctor Who. It's not so much that they're good looking (I mean, yes, David Tennant is good-looking, and Matt Smith is pretty cute, I'm not trying to say they're not), but what I love them for is what they say and do: their brilliant flashes of inspiration, their ruthless investigational styles, their determination--and ability--to save the world. (A couple of actors have played Wimsey--I haven't seen any of the adaptations yet, but here's a blog with photos. I have to agree with the blogger that Peter O'Toole would have made an excellent Wimsey.)

It's the same reason I'm in love with Benedict Cumberbatch--just looking at a picture of him I wouldn't say he's the sexiest man out there, but watching him play Sherlock--the expressiveness of his face as he ponders and discovers and is delighted at being proved right--not to mention his eyes, he has gorgeous eyes--I would not kick that man out of bed.

Wimsey also reminds me of another favourite fictional genius, Miles Vorkosigan (also a Lord--and hey, so is Doctor Who*! Something about having power and using it for good is also pretty darn attractive in a man, wouldn't you say?)

And, by the way, Cumberbatch is a simply brilliant actor. I saw him play Frankenstein, and he was frighteningly convincing. Not that it was a scary play--it was a wonderful adaptation that explored all the themes of power and knowledge and what makes us human. Johnny Lee Miller was superb as the monster (I'm running out of superlatives!). I'm sad that I missed the showing of the alternate production (Cumberbatch as monster, Miller as Frankenstein).

*I was trying to find this clip from The Girl in the Fireplace: "This is my lover, the King of France." "Yeah? Well I'm the Lord of Time."
Posted by Kim Aippersbach at 10:10 AM 2 comments:

Does anyone else think that sounds totally cool? Who is Benedict Cumberbatch, you ask? Oh, you poor soul. Go now and watch BBC's Sherlock (first series is on Netflix). 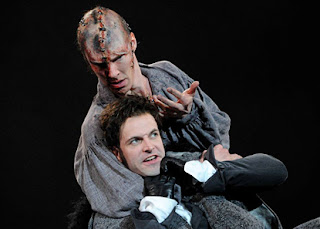 Now, this might be just another story of why I wish I lived in London*, but it turns out there is a chance for those of us on the other side of the world: they filmed both productions, and now they're showing the movies. And I found out about it just in time! They're showing the Cumberbatch-as-Monster version next week, and the Cumberbatch-as-Frankenstein one the week after.

Frankenstein is not my favourite story (probably because my grade four teacher showed the Boris Karloff movie to us at Halloween and I had nightmares for weeks!). But I think this is a play that must be seen. I'll let you know how it goes!

*I missed David Tennant and Catherine Tate in Much Ado About Nothing. :(
Posted by Kim Aippersbach at 2:15 PM 3 comments: