Danika Dinsmore and the Ruins of Noe Blog Tour

First off, doesn't Danika Dinsmore have an awesome name? She could totally be a character in her own novels. And you'll soon see she's every bit as beautiful and interesting as her name sounds, because she's my very first ever Blog Tour Author! 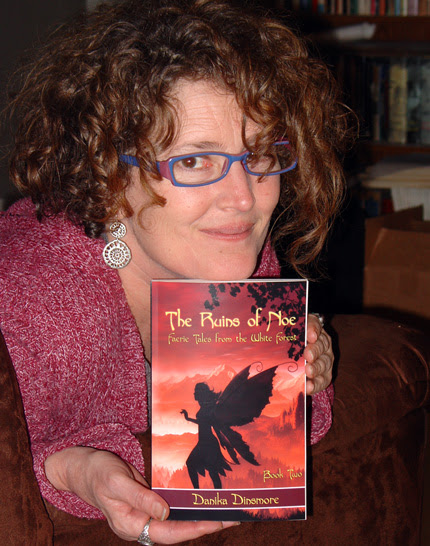 Faweh is an imaginary world (on a completely different planet: I know 'cause there are two moons!) populated by fairies and tree people and earth people and sprites and giant carnivourous caterpillars and horned Huggabeasts and . . . there's a Lexicon to help you keep them all straight.

The White Forest is a protected realm on Faweh where fairies live out their destinies guided by the Ancients. It's peaceful, idyllic--and threatened. Brigitta has already had to leave the Forest once to undo a terrible curse; now her experience makes her the best fairy to travel even further away from her comfortable home, to seek an ancient artifact in the Ruins of Noe.

The Ruins of Noe is deeper and more satisfying than Brigitta of the White Forest. Brigitta loses her innocence in the first book; in this book she loses much more. Everything she believes is called into question. But Brigitta is resourceful and determined, and she gains interesting new allies. I liked the society of warring fairies she encounters, with all its opportunities for complications and complexities. I liked Queen Maab: very evil! Loved the Nhords (otherwise known as Huggabeasts, for good reason). I liked that the ending isn't all neatly wrapped up: there's definitely room for a sequel. (Don't worry, it's not a cliffhanger!)

But you don't really want to hear what I have to say. I asked Danika to do a quickie interview, and she responded with way more than I was expecting! Turns out she's intelligent and well-read and watches movies I've never heard of! (But she's a Dr. Who fan, so we must be soul-mates anyway.) (Sorry about the funny fonts: it's what happens when you cut and paste from Microsoft Word into Blogger.)

Is there a book you read as a child that made such an impact on you that you remember the circumstances of reading it?
This is an odd memory, actually. I had found a lost dog. A little old chihuahua. His side teeth were missing, so his tongue stuck out on one side, and he was always shaking. He wouldn’t leave my side. I called him Mr. Dingleberry. And NO, I didn’t know what dingleberry meant.
It was the summer after 6th grade. My brother’s 8th grade social studies teacher had given him the book Coming of Age in Mississippi by Anne Moody to read over the summer. He gave the book to me. I sat in a chair outside in front of the garage in the sun with Mr. Dingleberry and read the book from cover-to-cover. I loved the book, but it disturbed me at the same time. It made me think about the cruelty of humans and also the courage. I remember feeling grown-up for reading such a serious and important book.
Oh, yes, then Mr. Dingleberry’s owners came and got him.

What's a recent book you read that made you go "Hmmm" (in a good way!)?
semi-recent:  Libba Bray’s Going Bovine
most-recent: Spiritwalk by Charles de Lint

Favourite recent-ish movie? (Or favourite all-time movie)
How about I just show you my tastes by listing 10 of my favourite films as fast as I can think of them. Ready, set . . .

Oh, wait, I think that’s 11.
Strangely my favourite movies are not generally speculative fiction. I mostly like character-driven and quirky dark dramedy.
[I'm guessing Danika would like Meg Rosoff's books]

Literary crush (Mr. Darcy? Aragon? Chrestomanci?)(Those may or may not be some of my literary crushes!)
I’m such a geek. I have both an author crush on John Green and a literary crush on Colin Singleton. It’s the anagram thing. Yeah, I know, not even on the map. Smart and funny do it for me every time, though.
If I had to pick someone in the fantasy realm it would be, hands down, Brashen Trell from Robin Hobb’s Liveship Trader’s series.

Favourite heroine (could be book, movie, comic book . . .)
Right now it’s Amelia Pond from the Dr. Who TV series. She’s awesome. Matt Smith as Dr. Who is awesome. Together they are the inside of an awesome pie and Rory is the flakey crust (in a good way).

Would you rather go to the moon or travel up the Amazon?
To the mooooon!!!

Do you like to cook or bake? If so, what's a favourite go-to comfort food you like to make?
For an I-need-dessert-right-now thing, the 5 Minute Chocolate Mug Cake is perfect. I use ½ the sugar, btw, and it tastes just fine. And rice flour. And sometimes soy or almond milk. Just google 5 Minute Chocolate Mug cake and you’ll find fifty recipes for it.
I’m warning you, though. Chocolate cake in 5 minutes is a dangerous thing.
(I bet you thought that was going to be a one word answer, huh?)

You say you're currently working on a pop space opera (which sounds fabulous, by the way!). It's pretty much at the opposite end of the speculative fiction spectrum from the White Forest: would you say you read more sci fi than fantasy, or vice versa, or is it about the same?
I’d say it’s about the same, but it depends upon a person’s definition of sci-fi. I’m not a purist and I don’t read a lot of hard sci-fi. I like everything from steam-punk to dystopian and most of the sub-genres in between. The only things I don’t generally pick up are splatterpunk or urban/gothic fantasy involving vampires or warewolves. I just haven’t found that many that I can get excited about (except the original Interview with a Vampire and I’m actually reading Dracula right now). Zombies don’t do it for me either. [Ah, but what about zombie unicorns by John Green?] Here's a great sub-genre list.

***
Thank you Danika! I've gotta go get me a John Green novel, and 5 Minute Chocolate Cake? Why did I not know about this!

Get to know Danika even better on her blog, The Accidental Novelist.

Belated Battle of the Books, and Requiem Maurice Sendak

Were you following School Library Journal's Battle of the Books this year? I checked in at the beginning but then sort of forgot about it, even though two of my favourite books were in the running. It's great fun, and a great way to get introduced to great books. (When you repeat great a lot do you find yourself wanting to pronounce it "gree-at"? It should actually be pronounced "greet." Silly English. Now I'm thinking of groats and I don't actually know what they are.)

Neither Chime nor Daughter of Smoke and Bone won, but they faced off against each other and the judge did an excellent job of comparing them. Check it out here. I haven't read the winner (nor any of the books in the final round), and it doesn't sound like my sort of thing, but I'm putting it on my TBR list, because realistic fiction about depressing topics can be worth reading if it's well-written!

In other news, Maurice Sendak has died. Book Aunt did a post this morning that says everything I would like to say. He made the world a better place.
Posted by Kim Aippersbach at 9:20 AM No comments:

I'm back! (I knew I couldn't keep up that blistering once-a-week post schedule.) It's two-for-one day here at Dead Houseplants,* because I've got a great middle-grade read that's written by a local Vancouver writer.** Not only that, but she's a regular MMGM-er, so you all probably know about her. Danika Dinsmore just launched the sequel to Brigitta of the White Forest, and I'm going to be a stop on her Ruins of Noe blog tour next week (my first ever blog tour--yay!) But for anyone out there who isn't familiar with the White Forest tales, here's the first book.

(In the interests of full disclosure, I have to say that I've met Danika, and she's a wonderful person, so that may have influenced my opinion of the book. But I'm really not a big fan of fairies, so that probably cancels out the first influence.)

Brigitta of the White Forest is about fairies with wings who live in trees and have magical seeds and make potions from flowers, and when I was twelve and in my rainbows and unicorns phase this would have been right up my alley. Now that I'm old and cynical I prefer my adventures to have less sparkle and more substance--and Brigitta delivers.

Dinsmore creates a rich and complex world (so complex it requires a glossary!) that takes the sparkly appeal of wings and flowers, and grounds it in a convincing society. Brigitta's father is an Inventor, her mother is a Feast Master, and her aunt is a Chronicler. Brigitta is waiting for her own destiny markings to appear on her wings, and she is nervous as she contemplates the possible roles she might play in White Forest society. But destiny sometimes has strange twists, and when a curse strikes the fairies of the Forest, Brigitta and her annoying little sister have to journey outside the Forest to save them.

There are monsters aplenty, and good that looks evil and evil that looks good, and magic of all sorts, big and small. Dinsmore is endlessly imaginative, and the White Forest and the world beyond it are full of original creatures and creations. Dinsmore's world has a strange, mythical history that is only hinted at in this first book, but it gives Brigitta's adventures a sense of mystery and significance.

This is a fun read that will definitely appeal to girls in their fairy/unicorn/magic phase*** but also has enough epic excitement to interest fans of series like Warriors and Gregor the Overlander. (I can't promise that a boy will read it, though!) I suspect that pipberry pies and tigermint teacakes are the right analogy for this book: you'll have to visit the White Forest to try them and find out!

Don't forget to go to Shannon Messenger's blog, where she links to all the other Marvelous Middle-Grade Monday-ers.

* Where we try to make up for all our deficiencies in the most efficient way possible.

** If I wanted to extend my 100-mile diet to books, (which we might have to do after the coming apocalypse (see my previous post on toilets)) she would count!

*** Tell me girls still have this phase, (closely followed by all things horses): tell me it hasn't been completely eclipsed by vampires and fallen angels.
Posted by Kim Aippersbach at 12:08 AM 4 comments: