Muse of Nightmares, by Laini Taylor

Laini Taylor has done it again. She has exploded my brain, and all the little brain bits turned into stars and flowers as they floated down around me. (That's the kind of thing Laini Taylor says all the time, but she says it more elegantly so it doesn't sound stupid!)

I'm not going to spoil either book in this review. If you've read the first book, you don't even have to read this: I'm sure you had Muse of Nighmares on preorder! (That cliffhanger! It's up there with LOTR and Riddlemaster of Hed, right?) All you need me to tell you is that it doesn't disappoint. It's tense, heart wrenching, shocking and entirely satisfying.

Strange the Dreamer introduces a crazily fascinating world with all of Laini Taylor's brilliantly imaginative touches: a city that no one can remember; a floating castle shaped like an angel; blue-skinned gods with terrible powers; a librarian no-one notices who has a knack for languages and who defines the world in kinder ways than anyone else.

Muse of Nightmares takes that world and expands it fractally, going forward and backward in time to explain and warp our understanding of everyone and everything

Strange the Dreamer gave us a cast of loveable, hateable, pitiable, admirable, terrifying and deeply understandable characters. (Most of them are all those things at one time or another, or all at once, like real people.) Laini Taylor must be a telepath, or a super-psychologist or something, because she is so good at understanding what goes on inside people's heads. I think Lois McMaster Bujold is the only other writer I know who is as good at forging character motivations out of their history. Everything each character does is completely inevitable based on who they are and what they've been through, even when they completely surprise you (as her characters often do).

Muse of Nightmares takes all those characters and gives them arcs you never would have dreamed of, mostly based on throwing them into even worse situations than you have imagined. And she adds a few more characters, because we need to understand how the gods got there and why they did what they did. Strange the Dreamer was about Lazlo and Sarai discovering themselves, and each other. Muse of Nightmares follows them but also dips into several other points of view as it answers why, and how, and WTF, and questions whether redemption is possible. When unthinkable things have been done to save people from even more unthinkable things, can there be forgiveness?

Minya is one of the best characters I've ever read. So broken. So strong. Can she be defeated? Can she be saved?

My other favourite character arc is Thyon Nero's. One of the many things Laini Taylor is great at is making all of her characters have agency, even the minor ones. She creates these ridiculously insoluble crises for her protagonists that you can't see how they can possibly get out of it, but you forgot about that other character who's been busy doing something you thought was irrelevant but turns out to be crucial and changes everything. Awesome plotting.

Since I can't say anything more specific about the plot, I'll just give you some favourite quotations:


... it spidered a crack through the atmosphere of threat.

... an affinity, a rush—like the turn of a page and a story beginning.

And when her hearts resumed beating, she imagined she could feel a spill of light into the veins that carried her spirit.

Lazlo's chances came without warning, and when they did, he didn't dither, and he didn't stop to pack.

[A character], earthbound, felt every choice he'd made, every action he'd taken, as a weight he carried with him. He wondered: Was it weight he could shed or throw off, or was it forever a part of him, as much as his bones and his hearts?

Also, Laini Taylor is the absolute best chapter namer of anyone, ever:


Even under dire circumstances, there is a unique pleasure in introducing the bizarre and inconceivable to others.

New dreams sprout up when old ones come true, like seedlings in a forest: a new generation of wishes.

Keep sprouting dreams for us, Laini. We need you in our brains!

Every once in a while I taste a cheese that makes my eyes roll back in my head it's so sharp but with so much depth and richness to the flavour; it does different things to every part of the tongue and keeps revealing new sensations as the after taste lingers. I tasted a cheese like that in Spain. Then they gave me a second piece with some quince jam spread on top, and my tongue and my brain exploded in much the same way as when I read this book. I just didn't know it was possible to taste/feel that much all at once. I'm still processing. (The book and the cheese!) 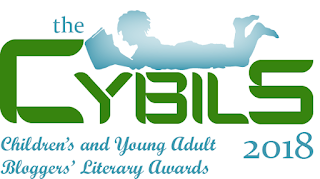 It's official: the 2018 Cybils Awards have begun! You can now nominate your favourite kids/YA books of 2018. Yes, you, whoever you are! Here is the announcement page with all the categories you can nominate in. And here is the link to the nomination form.

Please nominate awesome books that deserve to get awards! And then go ahead and use the nominee lists to make your TBR pile even longer!

My job is to read as many of the YA Spec Fic nominees as I can and collaborate with my fellow Round 1 Judges to come up with a short list, from which the Round 2 judges will pick a winner next February. I will be posting quickie reviews of as many of the books I read as I can, so follow along, and feel free to weigh in on which books you loved. The more conversation that goes on, the better! That's what the awards are all about.
Posted by Kim Aippersbach at 2:01 PM No comments: