The Kingdom of Back, by Marie Lu 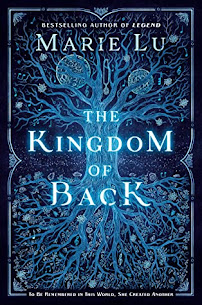 I am so happy this book exists, because it needed to, and then Marie Lu wrote it, so all is good with the universe.

Why did it need to exist?

If that isn't the making of a fantasy novel, I don't know what is! And Lu's execution nails it.

Lu is obviously a musician herself, because she writes about music beautifully, from the inside—she knows how it feels to practise, to master, to inhabit music, to be inhabited by it. She knows the connection between music and imagination, and she uses it so well to weave the fantasy into the real.

Nannerl is a complex, fascinating character, and Lu hits all the right notes (sorry, couldn't help it!) in creating her fraught relationship with her more famous brother. She loves him, she cares about him, worries about his ill health, loves to see him succeed, and is hopelessly, furiously envious of his success and the life he will be allowed to live that she is denied. She also simply loves music—loves hearing it, loves playing it, has an instinct for it, is a perfectionist about it—and so to be denied it because she is a woman is heartbreaking. Also stupid and unfair and just arrrggghhhh!

So, what if there were a fantasy bargain Nannerl could make that would allow her to create music and, more than that, be recognized for her talent and her creations? (There is historical speculation that some of Wolfgang's works might have actually been written by Nannerl, and Lu makes clever use of that in her plot.) Nannerl wants to be remembered, and a mysterious, attractive boy in a strange, beautiful forest full of haunting music says he can help her if she will help him reclaim his throne.

The fantasy kingdom Lu creates is gorgeous, evocative, imaginative, and just creepy enough. I don't know how much source material she had to work with (apparently there is a map of the kingdom the Mozart's manservant drew at the children's request, but I don't know what else there is), so I don't know how much was Mozarts and how much was Lu, but she comes up with a coherent, believable and compelling world. I love the way it melds with the real world: at one point a real flower grows out of Nannerl's music notebook. I also love the ambiguity: is it real or is it just a dream? Are they both just imagining it because of their stories? Are the stories they tell influencing the reality of the forest world? Are their actions in the forest actually influencing real-world events, or is that just coincidence? Lu plays with imagination and creation and choice and truth in interestingly layered ways.

Nannerl's conflict is so real, so frustrating, and the stakes are so high—at one point I stopped reading because I thought she was going to make a certain choice, and I both wanted her to make it and didn't want her to make it. I thought I knew what she was going to do, because history, but the story really wasn't predictable so I knew it could go either way. Lu doesn't take the easy route and doesn't make the obvious choices, and I loved the resolution she came up with.

I now want to find out more about Nannerl, and I've started learning some Mozart Variations! Apparently there is a movie called Mozart's Sister that I now need to find.

(PS: the new Blogger is worse in every possible way: how could they have made it so much more clumsy and awkward??)