A new Frances Hardinge novel! I had to drop everything and go find it as soon as I heard. This woman just keeps getting better and better. I'm going to go out on a limb here and call her the next Diana Wynne Jones, and I do not do that lightly. A Hardinge novel makes me turn every page with a frisson of excitement to find out what wonders await me in the next paragraph. 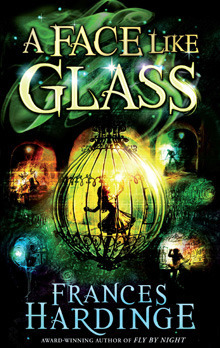 I don't know where to begin.  I can't really tell you what this book is like, because it isn't like anything else. Hardinge is one of the most original and imaginative authors out there. Her awesome website calls A Face Like Glass "a stand-alone tale of deception, cheese-making, betrayal and strategic amnesia." That pretty much sums it up!

You want to know more? A Face Like Glass is set in the underground city of Caverna, where master Craftsmen create magical luxuries (the Cheeses were my hands-down favourites). In this world of corridors and caves, the only light comes from luminescent carnivorous plants. (Coolest light fixtures ever!) The ruler is so paranoid only half his brain sleeps at a time. And children born in Caverna have to be taught how to make expressions on their faces; servants might only be taught a few, like "keen alertness" or "respectful attentiveness," while rich courtiers might have a range from "World Weary, with a Hint of Sadness and a Core of Basic Integrity" to "Amused Shrewdness, with a Well of Deeper Wisdom." So interesting! Original in an entirely different way than Catherine Fisher's Incarceron is original. (Even though they're both cave worlds, they're nothing alike. Except for the twisted, dangerous politics, maybe.)

Hardinge doesn't just have a bunch of clever ideas that she sprinkles through the story like pictures on the wall: everything is thought out; she knows how the cheeses and the wines are made and what happens if they aren't watched carefully; she knows what goes on behind the scenes to make everything work, so I completely believed in Caverna. Plus, everything ends up being crucial to the plot, from the biology of trap-lanterns to the psychology of Cartographers. It all fits together in ways you never would have guessed.


"The problem with Caverna is that it isn't flat. It goes up and down and slants and narrows and spirals round itself and bursts into huge caverns and meets itself going the other way. So—you know the crinkly edible bit inside a walnut? Well, suppose you had to draw a flat picture of the surface of that." . . .

"And now . . . imagine that you are trying to map the biggest, crinkliest, most complicated walnut in the world—that's Caverna. Cartographers have to twist their brains a certain way to understand even part of it, and afterwards their brains don't untwist.

That's what the plot is like. Five-dimensional. Intensely satisfying.

Then there's her language: inventive, textured, surprising, precise, evocative. "She felt the Facesmith's smile tickle over her as gently and irridescently as the headdress feathers had touched the ceiling." When I reviewed The Lost Conspiracy, I compared Hardinge to Laini Taylor in her poetic richness, but Hardinge is less flowery and more colorful and bumpy. Reading her sentences I feel like a kid in a toy shop where the words are the toys. Several times I laughed out loud in delight at her choice of words.

But other books have inventive settings and crazy plots and great language, and I don't love, love, love them the way I love this book. For me it always comes down to the characters, and I adore Neverfell. (She's named after a cheese.) "Despite her best efforts she was a skinny, long-boned tangle of fidget and frisk, with feet that would not stay still, and elbows made to knock things off shelves." Neverfell has such a good heart, and she lives in a terribly dangerous world, and it's heartbreaking and thrilling to watch the world be transformed by her naive, stubborn goodness. And ... but I don't want to give anything more away. I'll just say that Hardinge really understands people and their motivations. Loved Master Grandible the Cheesemaker. And the Kleptomancer. And ... Oh just go read it now!

Because I just spent all day making it, and it turned out delicious, I'm going to compare A Face Like Glass to chicken corn chowder, made with cream and fresh herbs from the garden (thyme, basil, tarragon, green onion, cilantro), and baked in the oven with herb biscuits on top. Rich, complex, textured, layers of flavours, sweet and savoury. (Might just go have another bowl right now.)
Posted by Kim Aippersbach at 9:48 PM 2 comments: