Books I got for Christmas

Or, rather, books I gave myself for Christmas. It's one of my favourite Christmas treats, the trip to the bookstore where I'm allowed to buy whatever I want! Some of the books get wrapped and labeled with my children's names, but we all know who they're really for!

This year I snapped up the first YA offering from Jasper Fforde, who I rank up there with Douglas Adams and Terry Pratchett in the absurd British fantasy category. (And I discovered there's another book in his Thursday Next series that I haven't read. Now I get to reread them all and then I get to read the new one!)

The Last Dragonslayer is trademark Fforde, but with a simpler plot: it isn't as completely brilliant and subversive as The Eyre Affair, but it's a lot of fun. Quirky characters with silly names, magic that gets flummoxed by the idiocy of modern life, a practical orphan who takes care of everyone and then finds out she has to save the world (and appear on talk shows). And a Quarkbeast. And a dragon. Whose immanent death causes a crazy real-estate rush. It's excellent fun, and maybe just a little bit satirical (a teensy wee bit!). Like a really good chocolate chip cookie with Smarties in it. (Not that Smarties are very satirical. But they're fun.)

This one I wrapped up with my son's name on it, because he's read the first three of Kazu Kibuishi's Amulet books, and was devastated by the cliffhanger ending of book three. I'm now rereading the first three, so I haven't cracked Book 4, The Last Council, but it looks every bit as gorgeous as the others. These are beautiful graphic novels with a compelling storyline and a stunning alternate world. I was pulled right in from the opening sequence of Book One: The Stonekeeper. (I deliberately didn't link you to Amazon or Goodreads or anywhere with a blurb about Book 1, because they all give away what happens at the beginning (I know it doesn't count as a spoiler if the book opens with it, but it still spoils the opening scene, I think. Consider yourself warned!)).

After the really good opening scene which I will not ruin for you, Emily and Navin move out to their great-grandfather's old, spooky house, and Emily finds an amulet in the attic. It's when they venture into the basement that the real adventure begins, with a spectacular two-page spread of the staircase winding down, down, down. I love the beautiful and terrifying world they discover. I love Emily and her struggle to do right by her family even when she's being pulled in heroic directions; I love Navin who wants to prove himself and then gets way more of an opportunity than he was expecting. I'm excited to see what new magical places and people we'll get to see in the fourth book. Because so much of the appeal is visual for me, I can't seem to come up with a food metaphor; music is better. (Am I being slightly synesthesic about this?). The Amulet books are like the classical composer Saint Saens (and this). 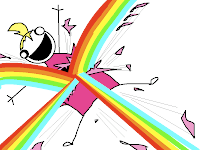 I have to interrupt this blog post, because while I was on Goodreads I came across a link to Hyperbole and a Half, and I've now spent two hours laughing out loud reading her posts. She's a little twisted and very perceptive and has this way of describing things, and these hilarious kid-drawing pictures. My mom probably won't like her (she does swear a lot)(the blog author, not my mom!), but if you like your humour dark and offbeat, check it out. The first post I read was a rather brilliant summary of clinical depression. Then I tried How A Fish Almost Destroyed My Childhood. Also be sure to read A Better Pain Scale and The Alot. (The picture comes from Am Adult, also hilarious.)

We now return to this blog post, which is now too long, so I'll have to make it To Be Continued . . .
Posted by Kim Aippersbach at 8:45 PM 1 comment: