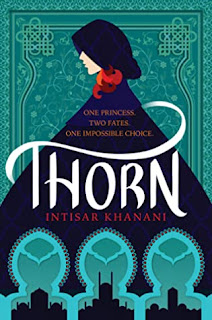 What a remarkable book! I'm sitting here a little stunned, feeling as though I've been punched with a velvet-gloved fist. There is so much in this book and it's handled so well!

Thorn is a retelling of the Goose Girl fairy tale, in which a princess is forced to switch places with her maid while journeying to wed a neighbouring prince. There's a greedy goose boy, a talking horse and a clever king, just like in the original. But what Khanani does with this story blew me away.

Princess Alyrra, or Thorn, as she becomes, is kind and courageous like a typical fairy tale heroine, but so, so much more. I love that for Alyrra, the spell switching her with her lady-in-waiting is an almost welcome way out from a future she didn't choose and greatly fears. She would actually be happy staying a goose girl, except that there are dangers and injustices and people she comes to care about, and she can't just stay silent and let everyone get hurt.

Oooh, silence, and words, and the power therein! There's a spell preventing her from revealing what happened to her, and I love the marvelous conversations in which Thorn decides what truths she can tell—given the constraints of the spell, yes, but also how much she trusts her questioner. And we learn so much about the other characters by how much they figure out from what she says! So interesting and clever!

But it goes deeper: silence is one thing Alyrra has mastered, because she is a victim of both neglect and abuse. The spell becomes a metaphor for the power of telling someone the truth about what happened—and then the narrative turns it around again, and Thorn's choice to tell someone about an abuser—and the strength and support she gets from that choice—makes her realize she needs to reveal the truth about the spell. (I hope this is confusing enough that it isn't too spoilery!) I'm just in awe of how Khanani weaves her material back and forth in such a compelling way. (Don't worry, there are lots of cool things I'm not spoiling!)

This is a story of someone put in a position of powerlessness who realizes that she still has choices. It's a story of finding allies and of being an ally. It's a story of justice and vengeance and the difference between them. It's a story of hurt and forgiveness and trust. It's got one of the most original and astonishing heroine vs evil villain climaxes I've ever read.

The writing is beautiful, lyrical but precise. (I'm reminded of "float like a butterfly, sting like a bee"). This is how and why you use first-person present tense: we are in Thorn's head, in the moment with her, trapped and frustrated by her circumstances, shaking with her fear. Khanani is very careful about how she describes violence and abuse—never graphic or shocking—but she writes with power. So, yeah, trigger warnings. This book reminded me of Robin McKinley's Deerskin, which is one I return to surprisingly often (there are just certain sections I don't reread)(Thorn is not remotely as graphic as Deerskin nor does it dwell in the same way on the aftermath of the abuse.) What I love about both of these novels is the strength, resilience and love that transform the character's pain into something victorious. I had tears in my eyes several times, but they were tears of amazement at characters' courage and kindness and wisdom.  Thorn also reminds me of Spinning Silver; I was blown away by that one, too.

I want to spend more time in the world and in the hands of this writer, so I'm picking up the companion novel The Theft of Sunlight (first of a companion duology, apparently, and with a notorious cliffhanger, so I may not start reading it yet!)

Lemon ginger cardamom cheesecake. Subtle, complex, eye-rollingly delicious. My daughter and I sort of made this up when I was visiting her and I'm trying to recreate it tonight. (We really should have written down the amounts of things, but we didn't really measure them at the time ...)