I just finished making my way through all twelve volumes of Ursula Vernon's webcomic Digger, and what a glorious, mind-bending, hilarious ride that was! It's all available now for free online, so you can go become obsessed too!

You know already I'm a rabid Ursula Vernon/T.Kingfisher fan. Well, now I'm rabider. (The vampire squashes may have had something to do with it: you have to keep your eye on those.) I also have an addition to my list of favourite heroines*: she's a practical-as-nails engineer who doesn't truck with magic or gods or prophecies, she's a mean hand with a pickaxe, and she's a wombat. 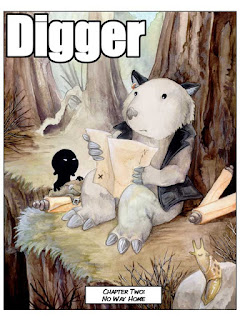 Yup. A wombat. Do you even know what a wombat is? I had to look them up. They're adorable. Digger-of-Unnecessarily-Convoluted-Tunnels, however, would give you a Look if you called her adorable. (And possibly favour you with a pithy wombat curse: her curses are the best!)

The thing about this comic is that it apparently started on a whim, and Ursula thought it would last for a few panels and be done. She threw together a bunch of random stuff like wombats, the elephant-god Ganesh (or a statue of him, anyway), an exiled hyena, a baby shadow-thing that doesn't know what it is, other awesome creatures I don't want to spoil for you—and if it were only the random juxtaposition of weird things with clever dialog and delightful art, it would be wonderful. But she kept going, and somehow she gathered up all her threads of weird randomness and wove them into a narrative of heartbreaking, breathtaking wisdom about how to be a decent, compassionate being in a world that doesn't make sense.

And because it's Ursula Vernon, the humour is laugh out loud, snort your tea all over the screen funny, and the philosophy can sometimes explode your brain.

Also, this web-archive includes comments from fans that greatly enhance the reading experience, as they reference everything from Star Trek to Terry Pratchett to Lord of the Rings, and debate archeology and geology and mythology and everything else.

Definitely worth a week or two of your life (there are around 800 pages!). It won a Hugo, after all.

Ursula Vernon writes for children, but I would say Digger is more appropriate for her T. Kingfisher readers (that's her pseudonym when she writes for adults). Not because of anything particularly graphic**, but, well, here are a few pages and you can judge for yourself:

And if those few pages don't make you want to read Digger immediately, then it probably isn't for you, and I despair of you, my child, I really do!

*which is going to get a blog post, really, I promise!