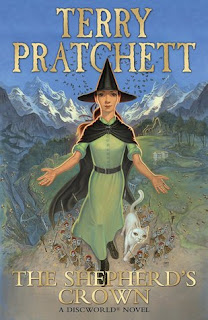 Every March, Kristen at We Be Reading hosts a celebration of the works of beloved fantasy authors Diana Wynne Jones and Terry Pratchett.

I adore Tiffany Aching. She's one of my all-time favourite heroines, up there with Sophie Hatter, Jane Eyre, Elisabeth Bennett, Irene from the Invisible Library, Cassandra from Stray, Tess (of the Road), Slate from Clockwork Boys ...* The Shepherd's Crown stays true to her stubborn strength and exasperated compassion. She gets some career advancement, as it were, —which, for a witch, just means more things that have to be done—and rises to the challenge with typical blunt style. "I want to do it my way. Not how the other witches think it should be done." She finds help in surprising places, and there are always the Nac Mac Feegle ready to take on all comers.

The afterword explains that "The Shepherd's Crown has a beginning, a middle and an end, and all the bits in between. Terry wrote all of those. But even so, it was, still, not quite as finished as he would have liked when he died. If Terry had lived longer, he would almost certainly have written more of this book." I read this first, and so was prepared to be disappointed in the book. But it turns out that a not-quite-finished Terry Pratchett book is still far better than the best of most other authors. It's true that this novel felt a little thin, compared to his other books. Less layered. But it is a complete and satisfying story, and it has all of Pratchett's wit and wisdom and gentle understanding of human foibles.

It also has a number of cameos from many of the Discworld novels. I haven't read all of them, so I didn't recognize them all, but it was lovely to see familiar characters show up. It felt very much as though Pratchett was saying goodbye to Discworld. There were some scenes that brought me to tears, because they were well-written and touching but also because I could hear the farewell in them.

I can confidently recommend this book to anyone who loves Pratchett, but you were going to read it anyway, weren't you?! It's also an excellent conclusion to the Tiffany Aching series, and just another excellent book about human nature and goodness and the true source of magic. I am happy to think of the conversations Pratchett and Death are having now, over a game of chess, perhaps, and a glass of something mellow. May we all be able to say, as I'm sure Death said to Terry Pratchett: "YOU HAVE LEFT THE WORLD MUCH BETTER THAN YOU FOUND IT."

Posted by Kim Aippersbach at 9:19 AM 5 comments: