What's on my Kindle and in my carry-on

I've got another bit of travelling to do (sister trip to Italy! Woot! *shhh! people might get jealous*), with all those long, miserable plane rides and boring layovers, so I'm loading up the e-reader with some things I've been looking forward to:

Ancillary Sword, sequel to Ancillary Justice, which was freaking amazing. Ann Leckie has such command of point of view and narrative structure. And a character I absolutely love. Worth all the hype it's been getting.

Two Serpents Rise. Max Gladstone knows how to title. And how to plot, and how to worldbuild. Three Parts Dead blew me away, so I'm excited to read another set in the same world.

Kinslayer and Endsinger, the rest of Jay Kristoff's Lotus War trilogy. Stormdancer was brilliantly original with great characters and a creepily believable, dark world (I kept thinking, no, this is too much, you can't expect us to believe that, and then I'd think: Industrial Revolution England was just like that. Except Kristoff's world has airships and griffins, so, way cooler.)

Signal to Noise, by Silvia Moreno-Garcia. The '80s, Mexico, music, magic. Silvia is a friend of mine, and lucky for me, because this book might not have come up on my radar otherwise, and it looks very cool.

The Heir Chronicles, 1-3: Warrior Heir, Wizard Heir, and Dragon Heir. Good, solid YA contemporary fantasy. I read these a while ago, and when I saw the fourth one, Enchanter Heir, at the library, I picked it up, but I had forgotten too much. So I'm rereading.

The Quiet Gentleman, because sometimes you just feel like some Georgette Heyer, and I keep finding ones I haven't read yet—yay!

And, because you can't always trust electronics, and I panic at the thought of being stuck with nothing to read, I stopped by the local bookstore and picked up a few paperbacks:

A Terry Pratchett I haven't read and should, because I like Granny Weatherwax.

The second of Patricia Briggs' Mercy Thompson series: got the first from the library and liked it, so we'll try another.

The first of Django Wexler's flintlock fantasy series. Bloggers I trust have been talking this one up, so I thought, what the heck.

A Turn of Light is a hefty (but complete in one volume) fantasy tome from Canadian Sci Fi writer Julie Czerneda. It's thoroughly original, delightfully quirky and edgily sweet. And not just because of the magic carnivorous toads, though they are a significant part of the appeal! 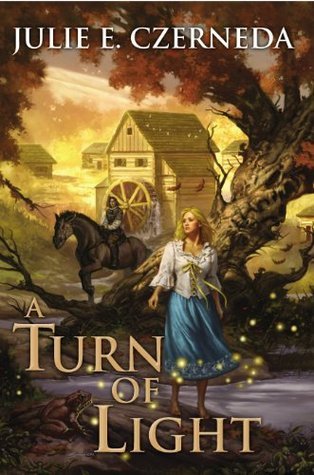 The cover of A Turn of Light is very indicative of the content: pastoral, magical, a bit mysterious. I would call it a magic kingdom book, but, though there are kingdoms in this world, the whole novel takes place in one little village in an out-of-the way corner of the map. No grand quests or battles, no princes or wizards or grand high viziers. Just a small group of farmers who have been cast out of the rest of the world but have been accepted by Marrodell.

Marrodell is not an ordinary valley. There are the toads, for example. They lay eggs big enough for people to eat (there are no chickens in Marrodell). They're also great at keeping houses safe from dangerous mice. Then there's the self-harvesting grain (not dangerous at all as long as you don't go into the field until the harvest is done). And the path that goes up the mountain that no one ever takes (and no one knows why). And the terrible nightmares that drive everyone away if Marrodell doesn't think they belong.

I thought the world-building here was marvelous. All the little details build upon each other to make this small geographical setting fascinating enough to support an entire novel. The characters are lovingly drawn: Jenn Nalynn, the innocent who longs to see the world; Bannan, the weary soldier who wants to escape the world, and Wisp, the—let's just say he's not human—who doesn't belong in the world at all.

It's a slow-paced book, not a lot of action, lots of description. The tension is in the slowly unfolding mystery of Jenn's identity and the danger of Marrowdell's magic. There's a love triangle, of sorts, but not an angsty romantic one (mostly funny, actually). Lots of family, friendship, trust and loyalty. There's evil in the world, but there are also good-hearted people who care about each other.

A Turn of Light held my interest over 600 pages because the magic is fun and different, because I cared greatly about the characters, because I like stories about people making choices and facing the consequences. Also because it's quite funny a lot of the time. And because I believe the care of good-hearted people is strong enough to defeat any evil and that's what this book is about.

My mom's meringues: crispy on the outside, chewy on the inside, so, so sweet. 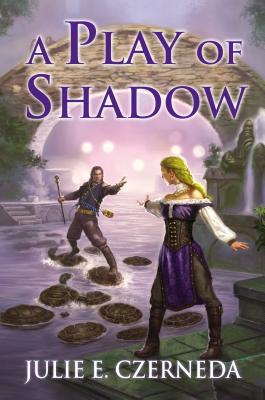 And having told you that this is a stand-alone, I now have to admit that there is a sequel! I thought the story came to a satisfactory conclusion, but when I saw A Play of Shadow I bought it right away, eager to return to Marrowdell and find out what Jenn Nalynn is going to do with her newly discovered magic. Bannan, Wisp, and Scourge are back (and there's a toad with a starring role!), and we meet two new characters who I really love: Bannan's nephews. Very realistically drawn boys with their own troubles, and Bannan's difficulties parenting them are true to life and quite hilarious.

I will say I found A Play of Shadow to be slower and a little more frustrating than A Turn of Light. The plot doesn't really get going until the last third of the book; I thought too much time was spent learning all the doings of the villagers—and I wasn't interested enough in them to remember who was who, so I just skimmed a lot of those bits. Maybe it's because the mystery is gone that I wasn't as patient with Jenn slowly discovering her powers, and the romance felt somewhat repetitive: yes! they love each other! we get it! So I'm not as crazy about the second book, but I still loved the world, and the characters, and if she writes more about them I will happily read more. 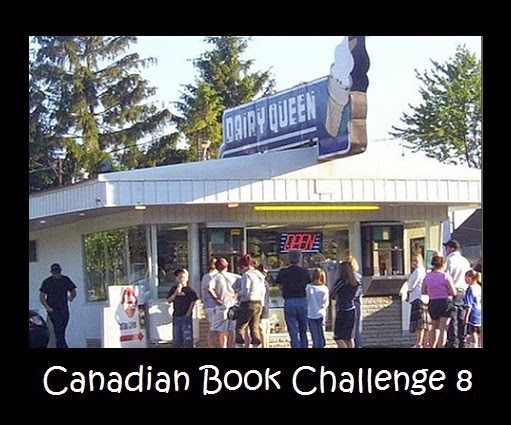 These are books 9 and 10 toward my Canadian Book Challenge, a great idea hosted by John Mutford on his blog The Book Mine Set. Head over there to find lots of reviews of Canadian books of all genres. (All sorts of hidden treasures you'll never hear about otherwise!)
Posted by Kim Aippersbach at 10:34 PM 1 comment: