Graphic novels I didn't know I needed in my life, and the picture books I got myself for Christmas

My annual visit to Kidsbooks to buy presents for *ahem* other people: I spent way more than I was planning, but that's because I didn't realize the third illustrated Harry Potter was out, nor was I anticipating how pricey Bedtime Stories for Rebel Girls would be (but it's worth every penny!) (Really well done: the writing, the art, the covers. I was seriously impressed. Got the box set for my daughter, who told me about them.) 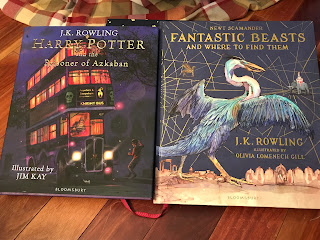 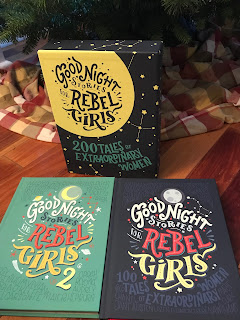 I added Toys Meet Snow to my Christmas picture book collection, because it is sweet and lovely. And I picked up the very funny Legend of Rock Paper Scissors, the brilliant Here We Are (I pretty much have to own everything Oliver Jeffers does), and the gorgeous Book of Mistakes. 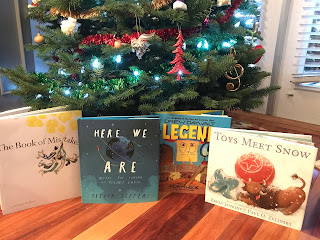 Just look at that art! 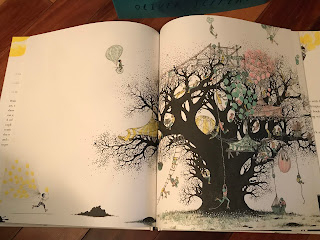 Then my quest for presents for nieces and nephews brought me past the graphic novel section, and I saw that Ben Hatke (of Zita the Spacegirl) has a new series. And I started reading Mighty Jack, and decided I needed to own both of them. The characters are all poignantly wonderful, the story is brilliantly imaginative, and the art is stunning. Just go read this. Best Jack and the Beanstalk retelling ever. (Also, there's a strangely familiar character that will delight Zita fans.) 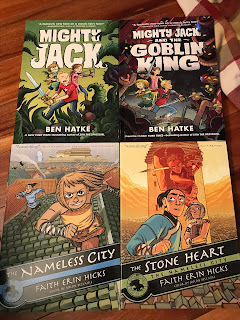 I'd read some good reviews of The Nameless City, and I've liked everything else I've read by Faith Erin Hicks, and she's a local! So I kind of had to pick up these two, and I'll be getting the third whenever it comes out. Great story of colonization, prejudice and the possibility of peace, centred on a believable friendship, with lovely, intricate art.

Posted by Kim Aippersbach at 4:35 PM No comments:

If I tell you Landscape with Invisible Hand is about the transformative power of art, will you roll your eyes and move on to the next book? Because you should really stop and read this one before you go. It won't take you long. 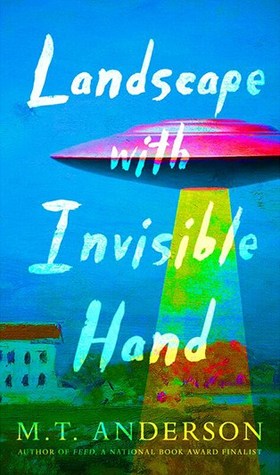 This was an artfully crafted little book full of sadness and hope. I thought it was going to be satirical, but really it's just straight up angry. The vuvv have come with advanced technology to solve all the world's problems, but it turns out they only solve them for the rich, and the poor are stuck with unemployment and a ravaged environment. Sound familiar?

By raging against aliens shaped like coffee tables, rather than real-world perpetrators of real-world injustices, Anderson can get away with a lot of serious social commentary without coming across heavy-handed. It's a bleak book with a lot of really, really funny stuff in it. I kept thinking I'd put it down because Adam's life was just getting too depressing, but then a scene would happen that made me go ???!!! I have to see where this is going! (Like the chainsaw artist.) Also Adam's voice is hilarious and I loved being inside his head.

I love that each chapter is a vignette explaining a work of Adam's art. There's layers of—I want to say self-reference, but I'm not sure that's quite what's going on—prose describing art and also describing the artist creating the art and the reactions of people seeing his art, which we can't see but can only imagine. It's interesting and immersive. The art brings Adam's poignant frustrations closer but at the same time sets them in a context that allows perspective. (I guess that's kind of what art does, isn't it!)

I loved the ending; it was funny and hopeful and believable. Remarkably uplifting for such a scathing book.

Miso soup. Just when you think it's too salty, you realize that it's perfectly salty enough.

A Cybil's nominee for YA Speculative Fiction.
Posted by Kim Aippersbach at 6:00 PM 1 comment:

That Inevitable Victorian Thing is such a quintessentially Canadian book! From the landscape, to the quiet politeness of the narrative, to the unquestioning acceptance of a monarchy we know is ridiculous but we like anyway. Most Canadian of all is the simple, puzzled plea of a theme: why can't we all just get along?

I want to meet E.K. Johnston: she is so fiercely optimistic! I imagine her musing on racism and bigotry of all kinds and thinking, "this is a problem we should be able to solve; I mean, come on, people!" And then thinking, "well, maybe if we altered history just a bit ..."

I won't go into the details of the world-building, because you can get that from the book blurb, but what she's attempted is to draw a picture of a world that isn't racist. Did she do a perfect job? No, of course not, that would be impossible. But it's so, so important to try! We have to be able to visualize what it might look like to have everyone treat each other equally with absolutely no regard for their genetic makeup. Does it seem a little contrived? Well,  it would be hard not to. But she's created a quirky, fun sandbox to play in.*

(Can I just say that I am all for imagined futures or alternate presents that are better than the current reality? Enough despair and dystopia! Yes, we need social criticism, but we also need vision! We need our Star Treks!)(End of mini-rant.)

A princess in disguise, a reluctant socialite and a young lumber baron walk into a ball. Our three protagonists are very, very Canadian, both in their identities and their characters. (It's not that all Canadians are nice, but I think we might be unique in the high social value we place on niceness.) Margaret, Helena and August are all genuine, kind and reasonable people. The plot in the first half of the book, in fact, suffers a little from everyone being too nice to each other: there's not a whole lot of conflict, just secrets that everyone is keeping from each other.

I almost quit reading halfway through, because I thought I could see where it was going. I particularly dislike plots that involve people lying and then things getting messed up and everyone getting hurt because of all the deceit going around. But of course Johnston did entirely different things than I expected. I loved the way all the secrets were revealed, and the consequences that fell out from them.

I laughed out loud at the solution our characters came up with to get out of the tangle they fell into. I had predicted it, but I still laughed when it happened, because of the way it came about. It's an eminently reasonable, practical, Canadian happy-ever-after. (It would never actually work, in the real world, but this is a fairy tale (she tells us so!). Or possibly a Shakespeare play—I'm not well-versed enough to recognize which one it might be, but it has that sort of feeling to it—the comedic inevitability of how everything turns out.)

The whole narrative is suffused with a quiet enjoyment of the absurdity and tenderness of human relations. There's a gentle, self-depreciating humour that sometimes breaks out into hilarity. And sometimes there's just the loveliness of simple pleasures: dressing up for a ball; jumping into a cold lake; baking butter tarts; fishing. Summer in a cottage by a lake. (I was a little disappointed that no one got kidnapped by pirates, but this isn't that kind of a book.)

This isn't a book for everyone. Even if you've liked Johnston's previous work, this one might be a little too slow, the humour too quiet, the plot too quirky. But if you can find your inner Canadian, it will bring a smile to your face and a lingering pleasant aftertaste.

Sparkling raspberry lemonade. (This book would probably be best enjoyed at the height of summer. In a cottage. By a lake. Sipping lemonade.)

*I get far too much glee out of the fact that the pirates on the Great Lakes are Americans. (Sorry!)
Posted by Kim Aippersbach at 10:09 PM No comments: