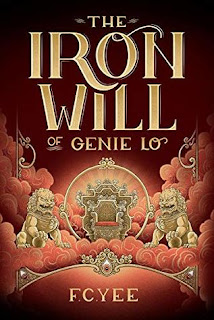 I was really excited about The Iron Will of Genie Lo, and I wasn't disappointed. It's every bit as good as The Epic Crush of Genie Lo, and my one disappointment is that it appears to conclude the series—I would have read a lot more adventures of Genie and Quentin! (Though Yee might have decided there was no way he could top the stakes of this one, and I respect walking away from the mike drop!)

The Monkey King is a great trickster character from Chinese mythology, and Yee has so much fun with him and his partner in mayhem, over-achieving California high-school student Genie Lo. I loved Genie's character: she's flawed, she recognizes her flaws, she's trying to do the right thing, and she gets so relateably exasperated with herself, and with everyone else who makes it so hard to figure out what the right thing is. There's enough character development that I would read a book just about Genie trying to figure out college choices and her relationship with her parents and how to communicate with her boyfriend. Throw in demons and a bunch of Chinese gods being petty and manipulative, and Genie doing her best to fulfil a divine mandate while still getting good grades and protecting her best friend Yunie from all the supernatural stuff going down—so much fun! And I cared so much about all of them.

Everyone from the Goddess of Mercy to the ant leader of the demon horde to Yunie's hilariously true-to-life cousin at college was an interesting character that I wanted to know more about. Yee has a way of summing up people and situations in unexpected but perfect metaphors:

How was I supposed to keep my life options open if I didn’t at least double major? The concept was rationally appealing but still unpalatable, like cilantro.

... a wizened, disproportionately deep voice. He could have narrated a nature documentary about himself.

it looked like we were having a funny, lighthearted conversation, like women in stock photos. All we needed were some salads.

There are a lot of similarities between this book and Victories Greater Than Death, which I ended up getting bored with and not finishing: colorful, larger-than-life characters, lots of crazy action in imaginative settings, juxtaposition of normal teen-age angst with save-the-universe stakes. So why did Iron Will work for me where Victories fell flat? I think it's in how much Yee respects both his material and his audience. I didn't get the sense that Anders believed in her aliens; they felt more like props to make the story more exciting, and the story was there so that her teen characters could Learn Something. Yee's gods and monsters were every bit as over-the-top weird, but they felt real to me. And Genie wasn't there to learn a lesson: she was there to kick butt and yell at people to stop being stupid. That she figures out how to be true to herself and still live up to everyone's expectations (including her own) is an inevitable result of her character intersecting the story.

The ending felt a bit rushed to me: this could totally have been a trilogy, and I have to respect that Yee didn't drag the story out on purpose to make it three books, but I would have happily read a third one! (Have I hinted strongly enough that I want another book? What about a novella? I'd be happy with a short story: pretty please with a cherry on top?)

Steamed BBQ pork buns, the kind you get at dim sum. Actually, this book is dim sum: so many different delicious things coming around on carts! You might not recognize many of them if this isn't your cultural background, but you'll want to try them all. And it's really sad that there's no way you have room to eat one of everything!

Posted by Kim Aippersbach at 2:33 PM