These Violent Delights, by Chloe Gong 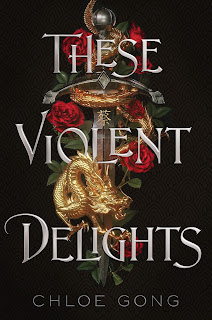 What an ambitious book! Let's retell Romeo and Juliet, set in 1920s Shanghai, during the rise of the Communist Party. Let's make Juliette the heir to the Cai criminal empire, and Roma the Montagov heir, representing Chinese and Russian gangs fighting for control of the city. Add in the European political and mercantile factions, choosing sides, and the Communist Party threatening all power structures, local or foreign, legitimate or gang. Oh, and let's also add in a disgusting monster spreading a terrible madness everywhere it goes.
The setting of These Violent Delights is awesome, and the way Gong works it into her plot is brilliant. Some of the Romeo and Juliet work-ins felt contrived to me, but she does cool things with the story, twisting it in interesting ways. Roma and Juliette are compelling characters—not immediately likeable. Juliette is a hard, violent person, and Gong doesn't glorify the violence. I appreciated that even when she's being particularly kick-ass against people whose asses definitely need kicking, we don't avoid the uncomfortable questions about Juliette's methods. There are some great side characters that kept me invested even when I wasn't so sure about our mains!
The monster is creepy, gory and terrifying, and makes a great metaphor for the forces tearing Shanghai apart. The mystery of where it comes from and how to stop it drives most of the plot, which I thought wandered somewhat in the middle. I didn't think it needed to be quite that convoluted. But the character relationships kept me reading, and the climax is tense and satisfying.
There will be a sequel, which I'm not sure I'll read, because that monster is haunting my nightmares!
Posted by Kim Aippersbach at 9:32 AM